Bishop Nichols’ pectoral cross, which was gifted to him at his consecration by the clergy of the diocese, was created by local designer Curtis Dretsch. Dretsch, the Director of Design and Technical Theater at Muhlenberg College, created the cross with designs and materials that carry special regional and theological significance. The following is an explanation from Dretsch:

When I first began a conversation with Kevin Nichols through Anne Kitch, I was excited by the direction in which he hoped to go. When we met for our first meeting he expressed a strong desire to have the design intentionally express not just traditional symbolism but regional qualities and characteristics.  He knew he wanted a Jerusalem cross with its associations with the five wounds of Christ/the four evangelists plus Christ/Christ and the four corners of the world.  Graphically the Jerusalem cross reads as strong and foursquare.  Its use of five Greek crosses gives it a balanced confident quality.  Bishop-elect Nichols desire for something that expressed the history and characteristics of the region comprising his diocese encouraged me to think differently about materials and finishes.  The geography of the area as well as the early reliance on coal mining and manufacturing especially steel resulted in a choice to use stainless steel rather than gold or silver as the primary material.  When we alter the vertical element of a Greek cross we can easily see the cross section of a structural “I” beam.  Some might see a resemblance to the old Bethlehem Steel logo.  Copy and rotate the copied shape ninety degrees and the result is the large Greek cross at the center of the Jerusalem cross. The large cross will also bear a border of a “stacked nickel” welder’s bead to further call attention to the artisan’s hand. The four smaller crosses will be expressed as solid subtractions inside circles with all the symbolic associations that we count on circles to elicit.  Amethyst is the traditional gem stone associated with the office of the bishop.  Amethyst is also sometimes found as part of the coal mining industry so, naturally, we want to use it here.  Instead of a cut, polished stone we’ll be using an amethyst crystal in its raw state at the center of the large cross.  The goal is to achieve something beautiful, elegant, appropriate and very much related to the history of achievement, strength, energy, and muscle of the diocese and the people who exist at its heart.

The pictures below show Bishop Nichols and Dretsch viewing the pectoral cross. 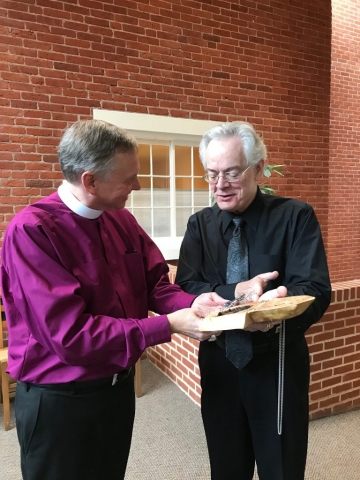 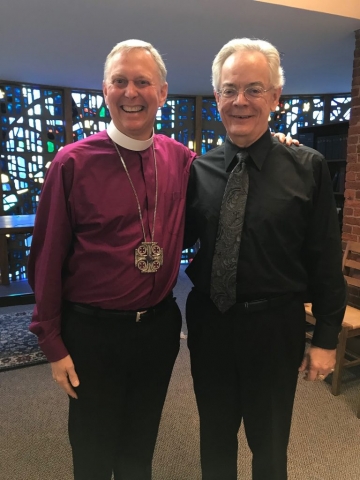