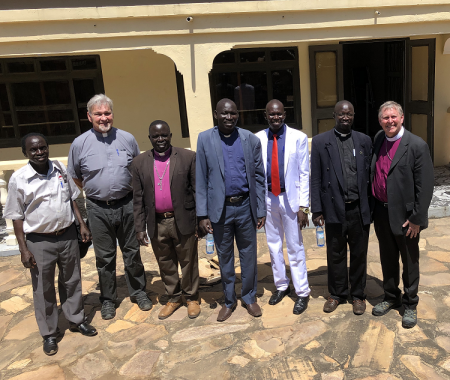 On February 17, Bishop Kevin Nichols and Deacon Charlie Barebo descended from their four-passenger plane in Moyo, Uganda, where they were greeted by Bishop Emmanuel Murye Modi and other representatives from the Diocese of Kajo Keji.

It was a bittersweet moment. A 13-year partnership between the Dioceses of Bethlehem and Kajo Keji, dubbed “New Hope,” led to the establishment of five primary schools, a high school, and a college in Kajo Keji, South Sudan, as well as important infrastructure such as wells for water. However, violence and upheaval in South Sudan forced the community to flee from their homes to the relative safety of Uganda. Nichols and Barebo hoped to meet with the people of Kajo Keji and learn firsthand how they were faring living as refugees in Uganda and how they might be able to return home.

“Decades of failed peace and violence have left the people rightfully afraid,” said Nichols. “But a tentative peace plan in South Sudan gives them hope that they might be able to return home.”

The group then traveled to the makeshift college that had been set up in Moyo, where they were greeted by students waving Palm branches and singing. The principal of the college, the Rev. Lule James Kenyi, led Nichols and Barebo on a tour of the school, and expressed hopes to build a women’s dormitory, a chapel, and more classrooms.

After the tour, Nichols and Barebo gathered with students and leaders who sang, danced, and told stories of their experiences as refugees. Nichols shared his own sorrow over the suffering they had endured, and expressed that many people love, support, and are praying for them in the Diocese of Bethlehem.

“He was letting them know his heart was with them,” said Barebo. “It was obvious the bishop was falling in love with the people and what New Hope had done.”

The next day, Nichols and Barebo traveled over bumpy, unpaved roads to the Pusa Refugee Camp about an hour outside of Moyo. There they visited the Romogi-Barebo temporary school, one of four temporary primary schools that were built after the people of Kajo Keji were forced to flee South Sudan. These schools are now overflowing far past their capacity. Teachers, who are not receiving paychecks, are still working to teach the children in these overcrowded conditions.

“The student body swelled from 2500 in Kajo Keji in the permanent schools to up over 4000 at the temporary schools,” said Barebo. “So you have structures that were intended for 400 kids that have 800 kids in them.” 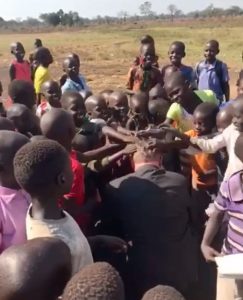 As Nichols and Barebo entered the school, they were greeted by throngs of excited children, who jostled to touch the bishop’s hair. The children then sang and danced, while teachers and community leaders shared stories of their time in exile, and their hopes to return to Kajo Keji.

The next day was tinged with sadness, as Nichols and Barebo left the camps in and around Moyo, and traveled into Kajo Keji, where they saw the abandoned communities in which the New Hope schools were built.

“I was struck by the beauty of Kajo Keji,” said Nichols. “It was a beautiful land, but now barren. I began to dream about what life would be like when the people return.”

As Nichols and Barebo surveyed the original New Hope schools, they were dismayed to learn that the buildings had been damaged, not by war, but by vandals. 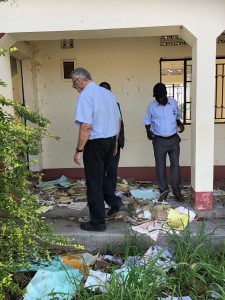 “They’d taken off the doors and the shutters and the metal windows. They’d opened up the book rooms and just thrown the books on the floor,” said Barebo, “My heart was flooded with all the people who had sacrificed so much…and all the love that went in to building those schools.”

The day closed with dinner and the celebration of the Eucharist at Bishop Emmanuel’s house. The final day was spent with Bishop Emmanuel and his staff to create a framework for how the Diocese of Bethlehem and New Hope can help the Diocese of Kajo Keji as they seek to return to their homes and rebuild their communities.

“I was amazed by the incredible work our diocese has done over the last 13 years,” said Nichols. “Our partnership with Kajo Keji has transformed the lives of generations of the most vulnerable people on this earth, and I am grateful that we are able to support our friends and partners as they return from their exile.”